The Orders of Death

++Connection Made++
Ok for this installment I'm bringing you some agents of death, For a long time I've been developing the Guild of Night a death cult that is tied to the service of the Order of the Iron Rose, Inquisitor Altus has the honour of calling himself the Guild Master and surrounding him as his inner cabal are the Unus Quisnam est Nex most prominent of these are the figures known as Inquisitor Pavor Vepres and Operative Slade.
The Guild itself is broken up into 4 castes each specialising in in a particular form of battle first us are two members of the Macto Caste
Unus Quisnam Insisto Dico of Macto - Nijin 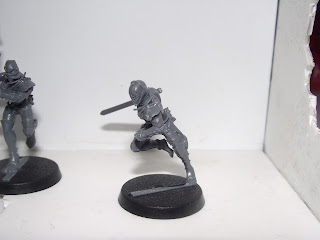 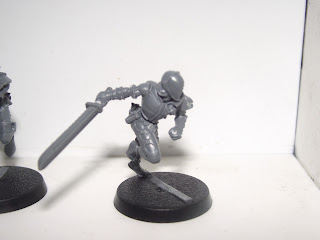 And a Female of the Macto Caste 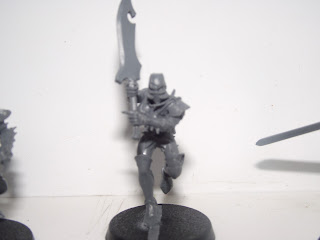 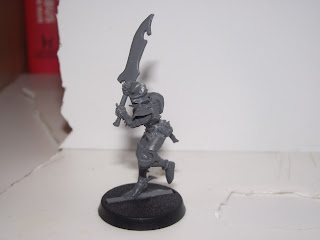 And a member of the Occisor Caste 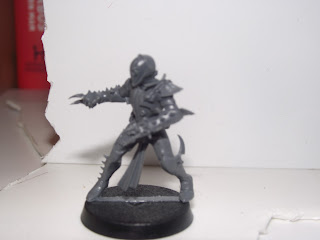 So today I'm bringing you the hordes of this little project I've been working on some of these for a while and they've long been sat in a case awaiting painting, many of these will become traitor guard or some such but I'm also inclined to add some to my Inquisitor retinues

So first up we have three fanatics armed with eviscerators (Ok one has a big mace) these were made from what I think is obviously Empire Flagellants with space marine chain swords added to their flails. 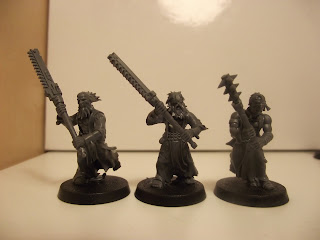 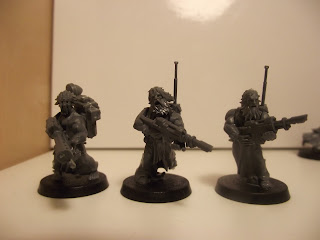 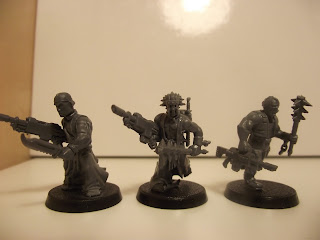 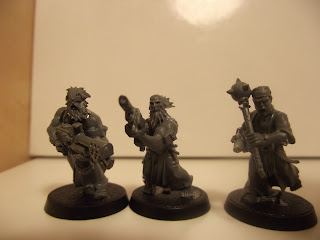 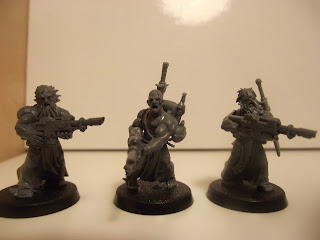 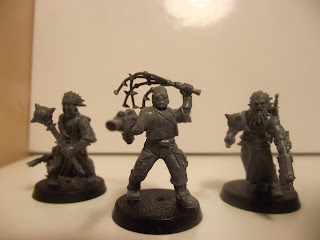 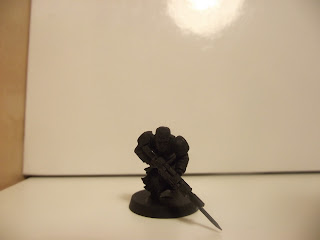 And now presenting 3 members of an Inquisitorial fire team armed with Hellguns and equipped with rebreathers carapace armour they form a formidable strike team, I'm planning on adding a few more members to include a pair of assault troops armed with mauls and combat shields and a few support troops armed with shotguns. 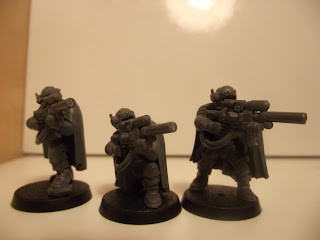 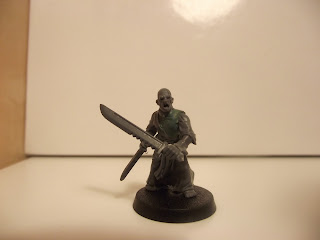 And onto some Muties using the left over Catachan bodies and some Kroot arms I've made some line soldiers to support my traitors. 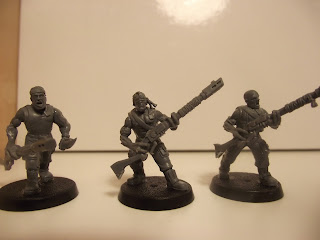 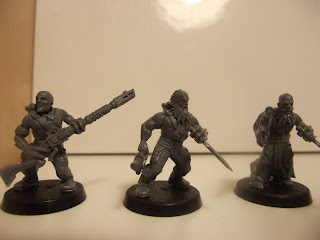 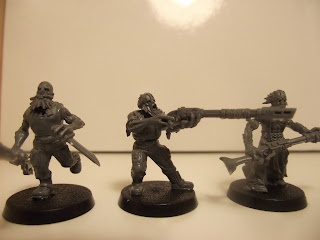 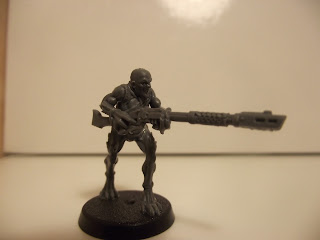 And finally a pair of Inquisitional operatives that will join one of my Inquisitor's Retinues in the future, on the left is an acolyte and on right is a Data Savant with servo skull aides and data slate 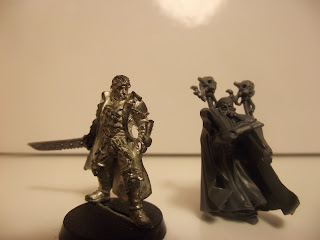 So for my first post on modelling and painting I thought I’d show off something from the past one of my first warbands and some things I’m currently working on.

So without further hesitation I present the full retinue of my first Inquisitor, Maxim Slade Ordo Hereticus. 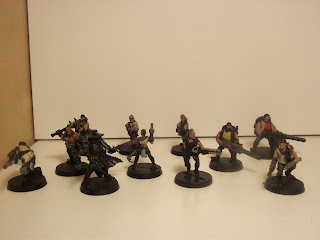 Slade is a young inquisitor bombastic and impulsive he’s a man to get things done, utilising a criminal network of thieves, gangers, hitmen, informants and assassins he is commonly mistaken by local law enforcement as a criminal mastermind an error he is more than happy to exploit. A skilled warrior Slade has always favoured the sword and his skill at arms is of highly regarded note, while his abilities as a marksman are not to be under estimated he favours light pistols to compliment his criminal persona. 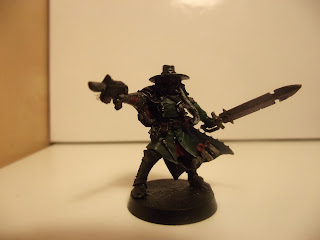 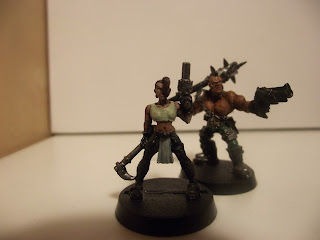 Two of Slade’s most infamous henchmen are Samson and Cassidy, Samson is an ex-guardsman of the Geno Battalions, injured and abandoned in the theatre while Imperial forces withdrew he found himself a warrior without a memory lost on a battlefield held by the enemy, if it were not for his gene enhance body he would have fallen to the enemy long before he was able to sneak aboard an enemy transport and escape his fate, moving from ship to ship he found himself on the world of Fortuna Sigma in the employ of a local syndicate as a hired gun, Cassidy a native of Fortuna Sigma was a wayward child a small time pick pocket and runner for a drug lord, it was during a gang war that Samson and Cassidy finally encountered one another, a girl trapped in the middle of a fire fight Samson instinctively stepped in to protect her and since that incident they have been together the girl and her protector, when Slade encountered them Cassidy had risen to rule a gang of her own, seeing an advantage for herself she offered the services of her gang to Slade. 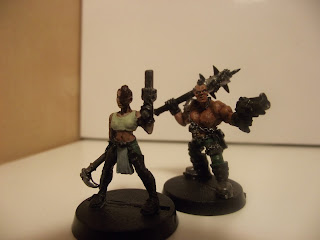 Now onto Something new 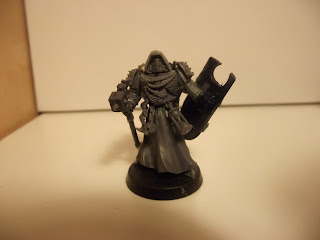 I had intended to take part in the Pimp my Wizard competition but I was unfortunately distracted by my son and work so was unable to dedicate the time to completing the challenge, and so it fell until now when I am falling into a routine that allows me to engage in my hobby, anyway here is the finished piece unpainted as of yet as I don’t get that much time, and unnamed. I wanted a character that was imposing and gave an air of raw power and force, an open stance and unsubtle weapon were the best options, so I chose a power hammer, to combine with this I considered giving him a bolt pistol or plasma pistol but it didn’t work so being a big fan of Inquisitor Hex from forge world I gave him a shield and I think it works. As a twist to the character I’ve considered the option that his armour is hiding a secret and in truth within the armour is a weakened man on the verge of death and has become a figure head of the Holy Inquisition’s Crusade leading a group of loyal warriors against the heretics. 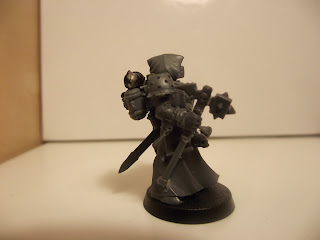 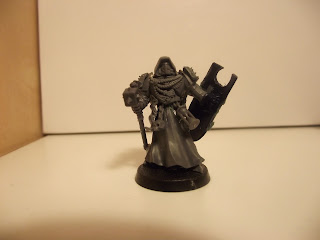 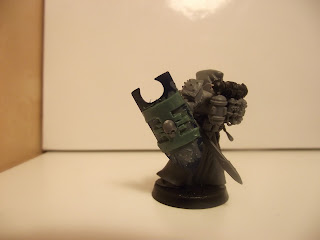 Another use of the Chaos Sorcerer that I put together is again a yet to be named Inquisitor I think this one might turn out to be a Radical psyker. 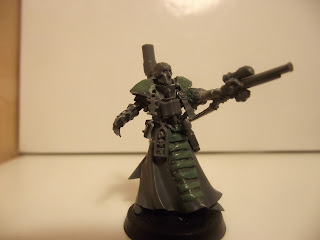 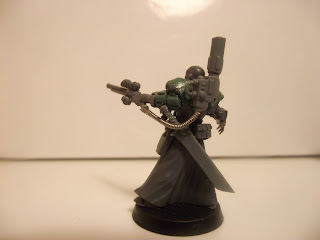 Welcome to the Order of the Iron Rose

As this is my first post of the blog I feel I should introduce myself, to many who would read this I am Necris a regular and long time poster on the Conclave. I have been a member of each incarnation of the Conclave from the days when Games Workshop hosted their own forums to it's current incarnation under the leadership of the great Saussure, I regularly attend Conclave meets and have attended a number of IGT's, I also use Necris on the Warseer, Bolter and Chainsword and Dakka Dakka forums but I am not a regular poster on those so am probably not as well known.

I have been a collector of miniatures from Games Workshop for close to 20 years and have been a gamer for longer this is because I used to play with my brothers collection as he taught me the rules and systems before I finally started collecting on my own. The first army I played with was an Undead army that my brother had collected and my first army was a Dark Elf army (an army that I Still collect to this day) I started 40K much later maybe when I was about 13 or 14 and as with many I started with Space Marines but that fell by the way side and I started an Imperial Guard army. Now I must say I am a humanist when it comes to 40K I've dabbled with the Xenos but have always come back to the Humans I currently collect a Space Marine task force from the Magma Crows Chapter a chapter of my own creation.

That being said for my mainstream games I have collected and played Inquisitor since it first came out, I have amassed a number of miniatures in excess of 20 I think in various stages of completion, something that always interested me since the release of Daemonhunters and Witchhunters is the creation of a Grand Army of the Inquisition in which every squad and unit has an Inquisitor leading his retinue this is one of my Dream armies and long ago I made a start on it a abandoned it as folly confined one of my boxes of failed armies. Since the birth of my little boy Jasper and my subsequent new direction as a house husband I've been clearing out some of my old collections and I stumble upon some of the Inquisitors I'd made and with the Inspiration of people like Molotov and his Inq28 crusade and Migsula and the =I=Munda circle I have returned to the concept with the intentions of building a number of retinues that can be used in both Inq28 and =I=Munda and eventually be combined to form a force for 40K, this also ties into my other dream project which I've been working on for some time which is a traitor guard army, I've been building my traitors for close to 2 years now and it's slow going but my dream is to have an army of human traitors led by towering traitor legionaries to this end I've been building true scale space marines and having seen the works of Migsula and his Legion force I feel I can roll this force back and incorporate it into the three systems as well.

That being said this blog is going to be for the dedication of both those goals building an Inquisitional force and a traitor guard army.

I hope you enjoy.

++Welcome Inquisitor++
You have gained access to the Order of the Iron Rose, a long standing non-cannon Order of the Inquisitor which is included within the background for many of my Inquisitor characters used through out the Conclave and other venues.
I have played Warhammer 40K and Inquisitor for many years and have been an avid fan for Games Workshop for over 20 years, this is my attempt to finally give me the drive while being a house husband to complete some of the many projects I have on the go, as such like many of my fellow gamers I have reduced my hobby to incorporate the newest aspect in my life my son Jasper, and being inspired by Molotov and his Inq 28 blog and the legion of Plastic by Migsula I've chosen to start this blog to document my hobby and give me a avenue to vent and grow my skill base as I develop as a hobbyist.
So welcome and Enjoy
Necris